We’ve officially made it one month past the Supreme Court’s decision to overturn Roe v. Wade. In the newsroom, my colleagues and I continue to report on the individuals and communities this impacts.

This week, I took a deeper look into people who can get pregnant in the military and what the decision means for them.

The sentiment one Army medic shared with me? A complicated internal conflict.

“I enlisted in the military to serve my country and save people’s lives and serve the people of the United States. But it had felt like my personal freedoms were being taken away in that moment and the personal freedoms of the people that I fight for,” says Sgt. Reagan Hasenfratz, making clear her perspective is hers alone and does not represent the Department of Defense or the Army.

“Anytime anyone is put in a position where their values or their beliefs may conflict with something that they’ve already agreed to do, that puts you in a really difficult place,” explains Amy Williams, chief clinical officer of Headstrong, a non-profit organization that provides mental health care for veterans and their families. “It’s not that different from the concept of moral injury, where people through their service (in the military) are faced with making choices that maybe don’t line up with their values.”

The dissonance some may feel, Williams explains, can cause anger, sadness and hopelessness.

Plus, military members face other factors that make the Dobbs decision frightening for abortion-rights troops, including not being in control of where they live and high rates of sexual assault.

To read my full story and learn more, click here.

Is all cynicism bad?

It’s easy to be cynical in today’s society. My colleague Alia E. Dastagir tapped into this feeling in her reporting this week. Here’s an excerpt:

Poll after poll shows Americans’ trust in government and one another is historically low. Faith in institutions is abysmal and interpersonal confidence has worsened. Ratings of scientists have now fallen below where they were before the pandemic, according to the Pew Research Center. Confidence in Congress, the Supreme Court, newspapers and the criminal justice system has sunk to its lowest levels in decades, according to Gallup. The majority of Americans rate the nation’s moral values as fair or poor.

Many people are feeling cynical, succumbing to a diminished view of humanity.

“Cynicism is the belief that people will exploit one another, and use and abuse one another, because in essence, at their core, people are, we say ‘morally bankrupt,’ meaning people are just essentially looking out for themselves,” says Kathleen Vohs, a psychologist and behavioral economist at the University of Minnesota. “It’s this underlying idea about human nature, and for a person who’s a hardcore cynic, human nature is selfish.”

Cynicism is a complex concept that has evolved to include multiple meanings and utilities. Experts say certain forms and doses of cynicism can be detrimental, while others may be productive.

‘My sister-in-law treats our house like a hotel, and I just can’t do it anymore’

In this week’s advice column, a reader wrote in: “My husband’s sisters both live outside the country and want to stay with us every time they come to the States. They want to stay anywhere from two to four weeks, and I just can’t take it. I am in my 70s and am unable to host people like I used to. As a nice gesture I told them they could stay one week this time and then book a hotel or rental for the additional time. They both have sufficient money to book a hotel or other accommodation but just don’t want to spend money on accommodations.

Additionally, the friends they have stayed with in the past have turned them down as they have evidently overstayed their welcome. I am tired of being the maid, the cook, the cleaner, everything when his family asks to stay with us. My husband gives me all kinds of grief for this, and at this point, I think I’d rather divorce him than have to put up with his family, his pouting and retaliation.

We never ask to stay with them when we go to their destinations! They’re laid-back and I guess that’s part of the problem – sleeping on the floor is totally acceptable to them. I am a bit more high-maintenance and need my privacy. I like walking around in my underwear and eating breakfast at 11 a.m. They never consult with me about staying in our home. Is offering only one week and not letting them stay for a month wrong?”

To see what our advice columnist said, click here.

“Myrtle holds down the fort while I’m at work and then drapes herself on me in one fashion or another once I’m home,” writes Mary Kay Longwell from Batavia, Illinois.

She adds that the 7-year-old Myrtle was a “great companion during the COVID lockdown years (and) continues to be excellent company!”

'She has the fighting spirit': How a refugee runner refused to allow tragedy to define her 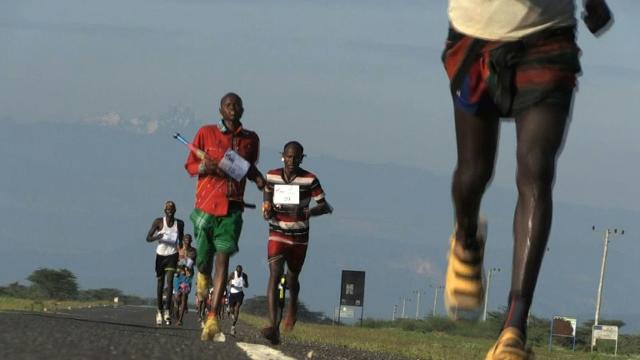 'She has the fighting spirit': How a refugee runner refused to allow tragedy to define her