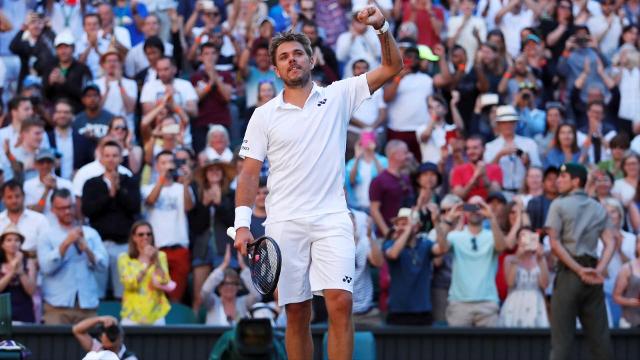 Nick Kyrgios is a mere 27 years old, and yet sometimes he talks about his tennis career as if in the past tense. If you’ve followed him since the beginning, you can understand it. Year by year, the further he got from the day he beat Rafael Nadal at Wimbledon as a teenager, the more likely it seemed to everyone — including Kyrgios — that he’d never again reach such a peak.

“I thought my ship had sailed,” he said. “I didn’t go about things great early in my career and may have wasted that little window.”

There were all kinds of theories about why Kyrgios had become tennis’ most frustrating underachiever, but the pattern never changed. He tanked matches. He acted terribly when things weren’t going his way. He clearly didn’t work particularly hard to get himself in the same kind of physical shape as his competitors. The higher the stakes got for Kyrgios, the more he talked about how much he didn’t care — a classic defense mechanism that helped him justify how much talent he was frittering away.

Every time the Australian showed a glimpse of seriousness, of purpose, of desire to be great, it faded just as quickly. The notion that he’d be the kind of transcendent, iconoclastic star tennis had long desired as an antidote to the more prim and proper legends who have dominated the last two decades has proven to be little more than myth.

And yet on Wimbledon’s Court 1, a more solemn, professional and focused Kyrgios did something Wednesday he’d never done before. With a relatively straightforward and antics-free 6-4, 6-3, 7-6 victory over Christian Garin, Kyrgios advanced within two wins of a Grand Slam title for the very first time.

Friday’s semifinal against Nadal may not quite live up to “the most watched match of all time,” as Kyrgios suggested in his news conference. But whether you like him, detest him, have grown tired of him or still hold onto the belief that he can bring the sport to the masses, it is undoubtedly the moment tennis has waited a long time to see.

No more stumbling out of a bar in Wimbledon village late at night, no playing video games round the clock, no sideshow distractions to prove some point about how monotonous and boring this staid old sport can be. If Kyrgios is ever going to do something in tennis that transcends the money, the controversy and all the unrealized expectations in his wake, it’s got to be right here and right now. And he knows it.

“Early in my career if I made third, fourth round or quarterfinals I’d be on my phone a lot, engaging online a lot, would be keen to go out to dinner and explore … not conservatively just go back to my house and put my feet up and get treatment and get good rest,” Kyrgios said. “Now, I think everyone has the same goal on my team and that’s why it’s working. I made it pretty known to them that I wanted to go deep here and possibly even raise the trophy. So I feel like it’s just as simple as get some rest, stay in the house. That’s not always been the easiest thing for me over my career.”

It’s both fitting and inevitable that Nadal, of all people, is standing in the way of his destiny. Not just because it’s a full-circle moment going back to their 2014 meeting that stamped Kyrgios as a breakthrough star, but because Nadal represents everything Kyrgios isn’t. He’s not just a 22-time Grand Slam titleholder, he’s tennis’ all-time greatest competitor who plays every point like it’s his last and has managed to stay at the top for nearly two decades without tanking matches, smashing racquets, disrespecting opponents or berating chair umpires.

Nadal will not say it out loud anymore, especially now, but he loathes the way Kyrgios can turn any match into a circus. He admitted as much three years ago after Kyrgios saved three match points to beat him in Acapulco, employing his penchant for showmanship and his full arsenal of trick shots along the way.

“He is a player who has enormous talent,” Nadal said that night. “He could win Grand Slams and fight for the top positions of the ranking, but there is a reason why he is where he is. He lacks respect for the public, the rival and towards himself.” Kyrgios responded on Instagram with a video of their icy handshake and the caption: “Don’t doubt yourself, there are plenty of people who will do that for you. I can smell the blood when I play this dude.”

This, of course, has been the blessing and curse of Kyrgios’ career. There is nobody else in the sport good enough to have nearly a .500 record against Nadal and Novak Djokovic (he’s 3-6 against the former, 2-0 against the latter) but not have the day-in, day-out consistency or desire it takes to stay in the top 20 of the world rankings for any length of time.

In the meantime, Kyrgios has readily admitted there were periods when he thought about quitting the sport, battled substance abuse and had depression leading to thoughts of suicide. Now, in the midst of the best period of his career, there is more off-court controversy. On Tuesday, an Australian media outlet reported that Kyrgios will be summoned to court next month in Canberra to face an abuse allegation made by his ex-girlfriend, at which point prosecutors could charge him with a crime.

Kyrgios said Wednesday he would like to give his side of the story but was advised by attorneys not to address the matter publicly. Until the exact nature of the accusation is known and the legal process plays out in Australia, it’s difficult to characterize what kind of trouble he might be in after Wimbledon ends.

But even with such a serious allegation facing him, Kyrgios remains a fascination and a draw that reaches well beyond tennis. If social media is any indication, his third-round match against Stefanos Tsitsipas — a four-set thriller that featured some of his best tennis and most egregious on-court behavior — drew in casual fans and commentators who aren’t typically dialed into Wimbledon. Having Kyrgios in the final of the world’s most important tournament would be a breakthrough moment that men’s tennis hasn’t experienced in a long, long time.

Since the Tsitsipas match, Kyrgios has behaved as professionally on court as he ever has, largely eschewing the theatrics and focusing on the business at hand. But what makes him fascinating is the knowledge that his emotions are always going to be on the knife’s edge, that he could say or do anything at any time no matter how improper. And, of course, that he’s capable of almost unmatched shotmaking brilliance within the space of a few hours.

In a sport that has been so predictable for the last 15 years, giving rise to the dominance of Nadal, Djokovic and Roger Federer, here’s a true wildcard with enough raw talent to beat them all and the volatility to watch it all implode.

With Kyrgios, it’s impossible to know what you’re going to get. But we’ve always wondered what might happen if he could ever keep it together long enough to reach this stage of a Grand Slam. Now that he’s in the semifinals, we’re about to find out.